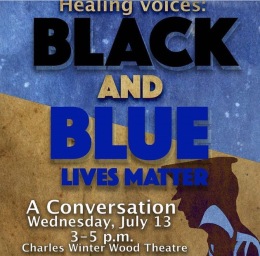 With the exception of a few poems I’ve written & paintings I’ve created, I have not publicly engaged conversations re: America’s current climate. While I have discussed, with a few friends, my concerns re: modern movements & offered my theories for proactivity–most of which are grounded in a Sankofa spirit–I have chosen to distance myself from what feels like disoriented ranting about racism, police brutality, & the human condition. However, as trivial as this may be, I could not keep quiet about FAMU’s contribution to minimizing the “Black Lives Matter” movement, its mantra, & its affirmation re: black people, black bodies, & black genius.

Why do “blue lives” have to be an integral part of this current discussion? Why do we–any of us, black, white, Latina/o folk–have to over explain the significance of affirming “black lives matter”? Why can’t “black lives matter” be an unapologetic proclamation that doesn’t require “all lives” “blue lives” or “white lives” in order to exist in the love & truth that grounds its definition? While I am the biggest advocate of King’s beloved community, enuf is enuf already! Got damnit! Love begins with the self. We need to unapologetically exist in the “‘Say it out loud! I’m black & I’m proud!’ ‘Black power!’ ‘Black is beautiful!’ ‘To be young, gifted, & black.’ ‘The blacker the berry, the sweeter the juice.’ ‘The blacker the college, the sweeter the knowledge'” language that affirms our being, for no such affirmation denies the other her or his humanity–& it definitely does not affect the humanity of black people.

Black people are the most huemane creatures to walk this earth. Our black grandmothers nursed white babies. Our black teachers built HBCUs that never denied any person a right to education. Our black civil rights activists–including Malcolm X–advocated justice for all human beings. Our black poets, painters, & philosophers imagined humanity in inhumane situations. & our researchers, inventors, scientists, & doctors promoted safety & well being for all people by way of gas masks, blood banks, traffic signals, & open heart surgeries. Aaaaaand, moreover, from Mamie Till to Cameron Sterling, the mothers, fathers, & children of our murdered brothers & sisters maintain (& publicly promote) peace & non-violence despite the violent nature of their losses. Hell, African-American people civilize the world. No one has to tell us that “all lives” matter.

So, stop it, FAMU! You are one of the top HBCUs in the nation whose mission claims to serve the “underrepresented and underprivileged.” Shame on you, first, for not having a university-wide conversation re: our current climate long before five Dallas policemen were murdered. While their deaths are an unfortunate result of one man’s understandable rage, their deaths should not have been the slingshot that hurled your call-to-action. & secondly, shame on you for terming a university-wide conversation that decenters black people & the “black lives matter” movement, “healing.” (& it doesn’t help that your flier includes an illustration of a white police officer.) “Excellence with caring” begins at home, with the self. So stop it. Get off of that media inspirited bandwagon that maintains black servility & second-class citizenship.