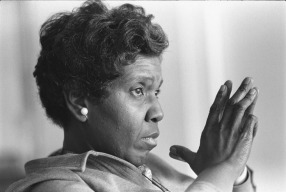 fashion, Jordan begins her speech w/an ethical appeal that explains to & convinces her audience that her presence as keynote speaker signals a radical shift in not only the ideals that the Democratic Party holds, but in the notion that every American citizen has a right to The American Dream. Responding to Langston Hughes’ “Harlem,” Jordan says, “[H]ere I am. And I feel — I feel that notwithstanding the past that my presence here is one additional bit of evidence that the American Dream need not forever be deferred.” My students dug it; they appreciated Jordan’s whole speech: her articulate voice, her unwavering confidence, & her intellectual content. And according to them, her introduction truly “hooks” the reader & convinces her/him that Jordan is both a credible speaker & human being–a Black woman not to be messed with, for, as she in third person proclaims, “I, Barbara Jordan, am a keynote speaker.”

In this current #metoo, #blackgirlsrock, #blackgirlmagic era we are currently in, my predominantly female classroom seemed to witness in the audacious Barbara Jordan the ancestral spirit that inspires Tarana Burke, Maxine Waters, Michelle Obama, &, if they let her in, will inspirit each of them as well. And so, as one student attempted to express Jordan’s rhetorical genius, she kinda went “goo goo gah gah.” And I get it, cause not only was Barbara Jordan an eloquent orator, but she was the first African American elected to the Texas Senate after Reconstruction, the first Southern African-American woman elected to the United States House of Representatives, & the first African American as well as the first woman to deliver a keynote address at a Democratic National Convention. However, what I didn’t get was why my student, while reaching for words to explain Jordan’s genius, exasperatingly said, “I mean, Dr. Bryant, she got that BDE.”

Me: She got that what?

Me: What the hell is BDE?

Entire Class: (giggles some more and pans the classroom looking for one brave spokesperson) Dr. Bryant, for real. You don’t know what BDE is?

Me: (exhales, rolls eyes, shifts position, lays papers down, and places hands on hips–arms akimbo) Will somebody just tell me what BDE is already?

Me: What tha? Are y’all serious right now?

And then the conversation ensued.

I asked my students–18 of them in total, including only two males–why in this 21st century world would they put a dick on Barbara Jordan. She is a woman, a BLACK WOMAN, I exclaimed. (And if flipping the student desk in front of me wouldn’t’ve appeared violently crazed, I would have.) Nonetheless, in a poorly constructed argument, or whatever, my students collectively claimed to masculinize Jordan because she was strong & assertive; she was powerful, they said, like, she had big balls. (Whispers in my head: “Yuck! They’ve given her testicles too.”) Yes, I said to them, out loud.

Barbara Jordan was strong & assertive & powerful, like a black woman. Expressing my own exasperation, I asked them–in our shared language & all–“How y’all gone minimize, erase, this black woman’s genius, her divine femininity, by givin her a dick? She got a clitoris!” And again, in a poorly constructed argument, my students tried to contend the rhythm of the phrase, “big dick energy,” after which I hyperbolically responded: “Clit, dick, clit, dick, clit, dick, clit, dick. So, why can’t she have “big clit energy,” I asked? Both are four letter, one syllable, rhyming words. Aaaaaaaand, Barbara Jordan IS A WOMAN!”

Yo! The control & brainwashing of the white patriarchy is trill. Despite attending America’s largest HBCU during a time of the first African American First Lady, whose black woman magic (read: divinity) frightens many media personalities, of hashtag movements that make men more accountable for rape & molestation, while empowering women, & of the Women’s March, where women wore pink pussy hats, my North Carolina A&T undergraduate students, most of whom are majoring in English Education, had not been #woke to the white male supremacy evident in language (altho when I think of big dicks, I can see only black men–who white men castrated. Shoulder shrug. Yet, says bell hooks when discussing black feminism, our castrated black men (subconsciously) push the white male agenda, so in the black man’s move toward racial freedom & empowerment, he participates in maintaining white male patriarchy; the beat goes on, don’t it?)

But it doesn’t have to.

I teach because I aim to remind students of their humanity–cause I want to reacquaint them to their divine selves. The classroom, altho institutionalized, is still a ripe space for cultivating a revolution. And so, that Fall day in 2018, I challenged my writing students to think about how they use language & how language uses them. Altho my teaching

position requires me to enhance student reading & writing skills–usually by reinforcing a standard that marginalizes their native tongues, at the very least, I can invite my students into a liberatory literacy practice that incites them to interrogate language & to awaken themselves to the conditioning that prohibits them from exercising a critical consciousness that frees their mind. Barbara Jordan & I did just that; we invited our students into a deprogramming. And I can only hope that my students will pass on that big clit energy I carried into our class discussion to their friends & into their communities, thus keeping the movement moving.