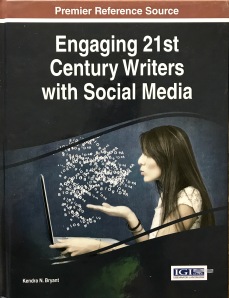 Basic composition courses have become a fundamental requirement for the major of university degrees available today. These classes allow students to enhance their critical thinking, writing, and reading skills; however, frequent use of technology and online activity can be detrimental to students’ comprehension.

Engaging 21st Century Writers with Social Media is a pivotal reference source for the latest research on the integration of social media platforms into academic writing classes, focusing on how such technology encourages writing and enables students to grasp basic composition skills in classroom settings. Highlighting emerging theoretical foundations and pedagogical practices, this book is ideally designed for educators, upper-level students, researchers, and academic professionals.

The many academic areas covered in this publication include, but are not limited to:

Writing instructors from the US and Saudi Arabia contribute 16 essays on the integration of social media into college writing classes. They discuss the integration of Twitter, WordPress, Tumblr, Instagram, and Podbean; using blogs and social media networks like Facebook, and activism and selfies on them; incorporating WordPress, LinkedIn, and Twitter to help students with professional development; and using wikis, including Wikipedia.

The 16 chapters in this volume are divided into five sections which examine various aspects of broadening the use of “digital literacies,” particularly social media such as Instagram, Facebook, Twitter, and blogs, in the college writing classroom. By involving different forms of writing, and examining the elements used there, students gain another view of the writing process. The projects and experiences described here are in fact fascinating, as they use the everyday Internet activities of young students in a new way, to have them examine the writing process from several points of view.

After taking a 10-day tour through Egypt last summer (2015), I began to think about the absence of hieroglyphic writing in rhetoric & composition discourse. I began to research that absence, when I stumbled across The Instructions of Ptah Hotep, the first book of rhetoric that precedes Greco-Roman ideology by over 3000 years. I presented a paper on my discoveries at the 76th Annual Convention of the College Language Association, April 6, 2016 in Houston, Texas. It is titled: “‘The Writings on the Wall’: The Absence of Hieroglyphs in Rhetoric & Composition Discourse and Instruction”

(Note the above presentation paper has since been revised and published in the CLAJ, the College Language Association Journal, 2017.)

I began writing “‘Me/We'” in 2013 and revised it for two years under the editorial diligence and support of The Journal of Basic Writing‘s editor, Cheryl Smith. In this essay–finally completed in 2015–I explicate how I created an embodied classroom community and improved student writing by way of blogging practices.

I’d like to write more essays about non traditional texts like the one I wrote about Quentin Tarantino’s Django titled, “The Making of a Western-Negro-Superhero-Savior: Django’s Blue Velvet Fauntleroy Suit.” In this 2015 essay, published in Studies in Popular Culture, I explore the rhetorical implications of Django’s blue suit and argue that his clothing transforms him from slave to savior.

“The Making of a Western-Negro-Superhero-Savior: Django’s Blue Velvet Fauntleroy Suit.”

Fall 2014, I originally wrote “‘The Heart of a Woman’: Re-Envisioning Maya Angelou’s ‘On the Pulse of Morning’ in Light of Martin Luther King’s ‘I Have a Dream'” for the College Language Association special Maya Angelou edition.  The abstract was accepted, but the final chapter rejected. However, the quint: an interdisciplinary quarterly of the north found my essay–which compares the rhetorical genius of both Angelou and King–publishable.

In 2014, I was invited to write an essay regarding Trayvon Martin for Kenneth J. Fasching-Varner’s, Rema Reynold’s and Lori Martin’s  Trayvon Martin, Race, and American Justice: Writing Wrong.  My essay, “But Can We Muster Compassion for George Zimmerman?” uses Martin Luther King’s agape love theory to discuss how we can combat hate with love.  It also discusses Mamie Till’s approach to ensuring a peaceful movement after her son’s (Emmett Till) 1955 lynching.

In 2012, during my first semester as an Assistant Professor of English at Florida A&M University, I published an article about the Improving Writing course I taught.  In that course, I integrated a computer technology that allowed students to contemplatively write, discuss, and think about each other in relationship to the rest of the world.  The article, titled, “Composing Online: Blogging as Contemplative Practice,” is published in IGI’s Exploring Technology for Writing and Writing Instruction.

Dr. Deborah Plant, Zora Neale Hurston scholar and professor in the Africana Studies Department at the University of South Florida, invited me to participate in her edited collection of new insights regarding Zora Neale Hurston.  Plant gave me creative licence, and so, taking an epistolary approach, I compared Hurston’s “Negro Expressions” with Hip-Hop Culture.

“We Be Theorizin” is also in Plant’s Hurston compilation; it actually serves as an Afterward to the text.  I wrote this piece, however, after reading Barbara Christian’s “A Race for Theory.”  Although I knew black people used creative energies as resilient forces, I didn’t understand that black people’s way of being–their ethos–is their theory.

Dr. Susan Schiller, composition theorist, invited me to include an excerpt of my dissertation, “Free Your Mind . . . and the Rest Will Follow”, in her The Holistic Educators newsletter.  In it, I included a discussion on mindful practices for high school classrooms.