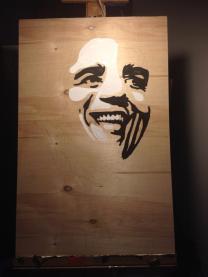 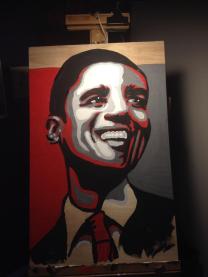 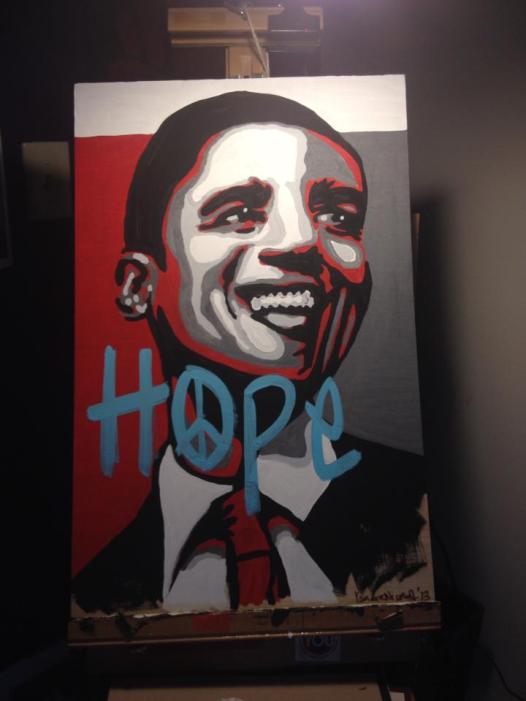 So, I tried again:

But I stopped. I was afraid to continue painting–afraid that if I kept going, I would lose him. ‘Cause this looks like Barack Obama, right? I left that painting unfinished, & I placed it–as well as the one I painted of “our next Black president”– against a wall behind my couch. They are still there.

Nonetheless, after about a year or so–when President Barack Obama began restorations w/Cuba–I was moved to paint Barack again. Obama’s humanitarian spirit moved me, & although I have witnessed it long before his Cuba relationship, I was–I am inspirited by his decision to rebuild relationship w/a country that America has so long denied. Obama appeared to me as a Black Panther who understood the problem w/capitalism & the possibilities in communism. At that moment, he remembered that Cuba provided Assata Shakur & Huey Newton refuge. It was as though he, too, saw Alice Walker in arms w/Fidel Castro. Of course I, who have long loved Alice, Assata, & Huey, fell in love (again) w/Barack Obama.

In his 2014 “Statement by the President on Cuba Policy Changes,” Obama says:

Cubans have a saying about daily life:  “No es facil” –- it’s not easy.  Today, the United States wants to be a partner in making the lives of ordinary Cubans a little bit easier, more free, more prosperous.

With “No es facil” in mind, I painted Barack Obama’s head in front of the Cuban flag. I imagine if Cuba ever reprinted its currency, it might look a little like this (or at least it should): 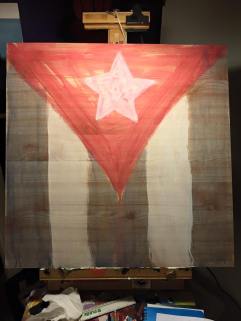 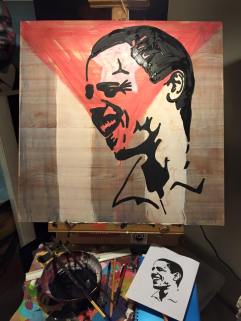