We, the (Black) People: Contemplating America’s Democracy amid Two+ Pandemics

Since middle school, I was a “revolutionary with no cause,” said my daddy—who apparently was amused by (or weary of) my dashiki wearing, Black nationalist poetry writing, presiding member of the Afro-American Heritage Club and NAACP Youth Council daughter of his who participated in Black History Brain Bowls, Theodore Gibson Oratorical Contests, and high school step shows. I was a “revolutionary with no cause,”

he said, who memorized and recited poetry by Paul Laurence Dunbar, Countee Cullen, and The Last Poets, knew all three stanzas of James Weldon Johnson’s “Lift Ev’ry Voice & Sing” by heart, as well as the best parts of John Landis’ Coming to America, Stephen Spielberg’s The Color Purple, and Robert Townsend’s The Five Hearts Beats. I spent Saturday afternoons sketching Malcolm X portraits, while watching BET’s Teen Summit, and if I received a letter from Ruchelle McGee—the incarcerated Black Panther whose San Quentin address I found in the back of Elaine Brown’s A Taste of Power—then I was spending time marveling over his telling me to “worship my path” and calling me “sister.” (When Mommy and Daddy discovered our pen-ship, they made me stop writing him. (Blockers.)

Anyway, I was no doubt a fist pumpingpowertothepeopleblackityblack who thought FinalCallbean pieselling Muslims were the shit—especially after seeing Spike Lee’s rendition of Malcolm X—although every Sunday morning I faced images of a white Jesus while belting “He’s a Battle Axe” with Antioch Missionary Baptist Church’s No. 3 Choir. Nonetheless, my daddy said I was a “revolutionary with no cause,” which didn’t faze my young teenage self. After all, “parents just don’t understand.” However, while adulting in this near first quarter of the 21st century where color-blind racism is the new Jim Crow, the prison industry is the slave plantation, and white hoods are blue suits, I often think about Daddy’s assessment of me, and I question if I am still “a revolutionary with no cause”—or did Daddy mean there’s no cause for revolution?

In the late 80s and early 90s, as I experienced it, I probably was “hotepping,” which is what Daddy meant when he basically called me “sleep”—or superficial as hell—cause I real life knew shit about what was really going on with Black America. I mean, although Rodney King was severely beaten by LA police officers who were later acquitted, which caused the LA riots, what I remember most about that moment was King’s plea for all of 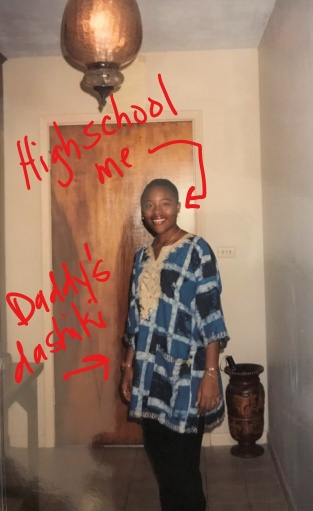 us to get along. And although Bill Clinton enacted the “three strikes you’re out” bill that incarcerated more Black folks, while allowing prosecutors to try 13-year-old children as adults, what I remember most about Clinton is Toni Morrison referring to him as our first Black president; Maya Angelou reciting “On the Pulse of Morning” during his first presidential inauguration; and his appearing on The Arsenio Hall Show playing the saxophone. I also remember the Anita Hill and OJ Simpson trials—but since no Black person went to jail, it was all good. I ain’t know shit.

I was brought up in a middle-class family with two working parents who attended college; my mother even obtained her master’s degree. I was a twin, who didn’t share clothes with her fraternal twin sister—so we each had our own pair of Guess Jeans overalls, Nike sweatsuits, and British Knights—and our neighboring family was white. My parents had an on-suite bathroom; my sisters and I were required annual dental and doctor’s visit, including with the private optometrist; and my entire Florida family—paternal and maternal grandparents, aunts, uncles, and cousins—met yearly for family reunions, as far as to California. We ain’t have no pool in the backyard, but I knew nothing about poverty, policy, or privilege. I didn’t see racism, classism, or sexism. And besides a terrorizing cousin who’s serving a life sentence in prison, crime didn’t darken my doorstep. Even when I was on an M-to-M transfer to middle school, whose term not only dehumanized me, but inferred a debased at-home situation—I ain’t realize English, my favorite subject, was criminalizing me.

Daddy was right: I was “a revolutionary with no cause.” I was shamefully unconscious of the Black America that needed a movement. Undoubtedly, I was a teenager—one whose parents, including her Daddy, shielded from America’s shit show. But can’t nobody escape America’s stench: Aging and living and critically thinking about myself in relationship to the world around me have awakened me. And while an awakening can incite radical behavior, which movements require, an awakening can also provoke suicide. Some days I feel like I am experiencing the latter. I think my awakening, coupled with this century’s tumultuously violent climate, has extinguished my childhood fire—albeit superficial—“to bring the gifts that my ancestors gave.” These days, particularly these COVID-19GeorgeFloydBlackLivesMatterDefundthePoliceVoteJoeBiden-Harris days, have caused me to ebb at the thought of rising “into a daybreak that’s wondrously clear.” I don’t think I stand stagnant alone.

In her 2020 Democratic National Convention Speech, former first lady Michelle Obama said, “Being president doesn’t change who you are, it reveals who you are” [emphasis mine]. She then called the American people out, noting in that same vein, how we vote in the upcoming election will reveal who we are. YikEs! Obama’s sentiment has been echoed by each major DNC speaker following her, and each of them has targeted Donald Trump in some way or another: He’s a predator, said vice president nominee, Kamala Harris; he’s egotistic, implied Hillary Clinton; he’s been “irresponsible to the safety and welfare of America’s 330 million citizens,” said Barack Obama; he blames, bullies, and

belittles, said Bill Clinton; and according to presidential nominee Joe Biden: he “has cloaked America in darkness for too long.” The resolve, according to each of these major politicians, depends on we, the people. We, the people are being charged with saving America’s democracy from what appears to have unraveled—not necessarily under a system that has never quite been democratic—but under the tyranny of a white man, often referred to as “Cheeto Jesus,” who the American people voted into office to maintain a democracy whose people never included Black folks. And while Trump, also called “Trumplethinskin,” has absolutely “fanned the flames of hate and division,” said Biden, politicians seemingly omitted from their speeches the American history that gave Trump permission to be both a white supremacist and the President of the United States of America.

According to social critic Michelle Alexander, in her June 8, 2020 New York Times op-ed article, “America, This Is Your Chance,” “Trump’s leadership has been disastrous. But it would be a mistake to place the blame on him alone.” The author of The New Jim Crow: Mass Incarceration in the Age of Colorblindness (2010), Alexander warns Americans to heed history, or else we will “lose our last chance at creating a truly inclusive, egalitarian democracy,” for we are presently witnessing the currents that led to America’s civil war. Alexander’s warning is brief; however, social critics Justin Worland, in his “The Overdue Awakening” (June 2020), along with Melvin Rogers, in his “What Good Is History for African Americans?” (May 2016) and “We Should Be Afraid, But Not of Protestors” (May 2020), but especially in Wade Davis’s “The Unraveling of America” (August 2020), America’s intent as a nation is thoroughly detailed. Although quoted in Rogers’ 2016 Boston Review op-ed piece, journalist Ta-Nehisi Coates describes America best:

[America is] a society that takes as its founding the hatred and degradation of a people, [whose] society inscribes that degradation in its most hallowed document, and continues to inscribe hatred in its laws and policies . . . Trayvon Martin is not a miscarriage of justice, but American justice itself. This is not our system malfunctioning. It is our system working as intended.

It is with white rage that white people (and those who identify as white) respond to Black advancement explains Anderson in the Prologue of her 2016 White Rage: The Unspoken Truth of Our Racial Divide. But that truth is loud and clear to most Black folks. White rage initially excluded two-thirds of Black Americans from Social Security; prohibits Black Americans from financing home mortgages; causes Black women to die

four times as likely in childbirth compared to white women; regulates Black children to under-resourced schools; and fill-in-the-blank. “Defined broadly enough, one could say that there’s systemic racism across every institution in America,” Jeh Johnson, Obama’s former Homeland Security Secretary” told CNN. And that reality, which is terrifyingly earthquaked in Davis’s Rolling Stone article—situated in a discussion regarding COVID-19’s attack on “the cultural foundations of our lives”—is the experience that restricts my rise.

Although Davis describes the impact COVID-19 “has had on the reputation and international standing of the United Stated of America” and suggests the unraveling of America’s so-called democracy as a result of the government’s ill-response to the pandemic, COVID-19 is synonymous with racism, and as such, Black people have already “found themselves members of a failed state, ruled by a dysfunctional and incompetent government largely responsible for death rates that added a tragic coda to America’s claim to supremacy in the world.” And yet, politicians are pleading with the people to “reclaim” a democratic state that never existed for Black people, and what’s even more upsetting, is their pleas feel directed to Black people—as if we real life hold the power to dismantle racism, to squelch white rage, or to vote into office a political figure who will actually insist on an egalitarian democracy.

I cringed when Hillary Clinton claimed Biden would get justice for George Floyd, Breonna Taylor, and Ahmaud Arbery, “because Black lives matter.” And while I appreciated Joe Biden opening his speech quoting the often-neglected Ella Baker, my appreciation was curtailed by my feelings of his appropriating Black culture for the race to the White House. And of course, any DNC speech that failed to acknowledge John Lewis would’ve been blasphemous, but he, too, is a reminder of the burden placed on Black people: “Ordinary people with extraordinary vision can redeem the soul of America,” he wrote in his final essay to The New York Times, July 30, 2020. But how can we redeem the soul of a country whose founders never had one? White people lost their souls to gain the whole world, James Baldwin said in his 1971 Soul! interview with Nikki Giovanni.

So, my hands are up. It’s definitely freedom time. And I am finally conscious toward the movement. But I feel stuck, kinda dead inside, like I’ve suffered a spiritual suicide. I don’t believe America is ready—or even desires to make a habit out of democracy, for many Black Americans have been working to democratize America since before Reconstruction. From Frederick Douglass’s “What to the Slave is the 4th of July?” to Billie Holiday’s “Strange Fruit” to Alvin Ailey’s “Revelations” and James Baldwin’s Notes of a Native Son; Margaret Walker’s Jubilee; and Cornel West’s Race Matters, Black folks stay talking about, singing about, dancing about, writing about racism until we’re blue in the face—blue in both anger and sorrow. So, although Eddie S. Glaude, Jr. claims “we cannot wait for white America to end racism,” the responsibility lies with them. What more can Black Americans do but “walk with the wind” and maintain our own social distances?